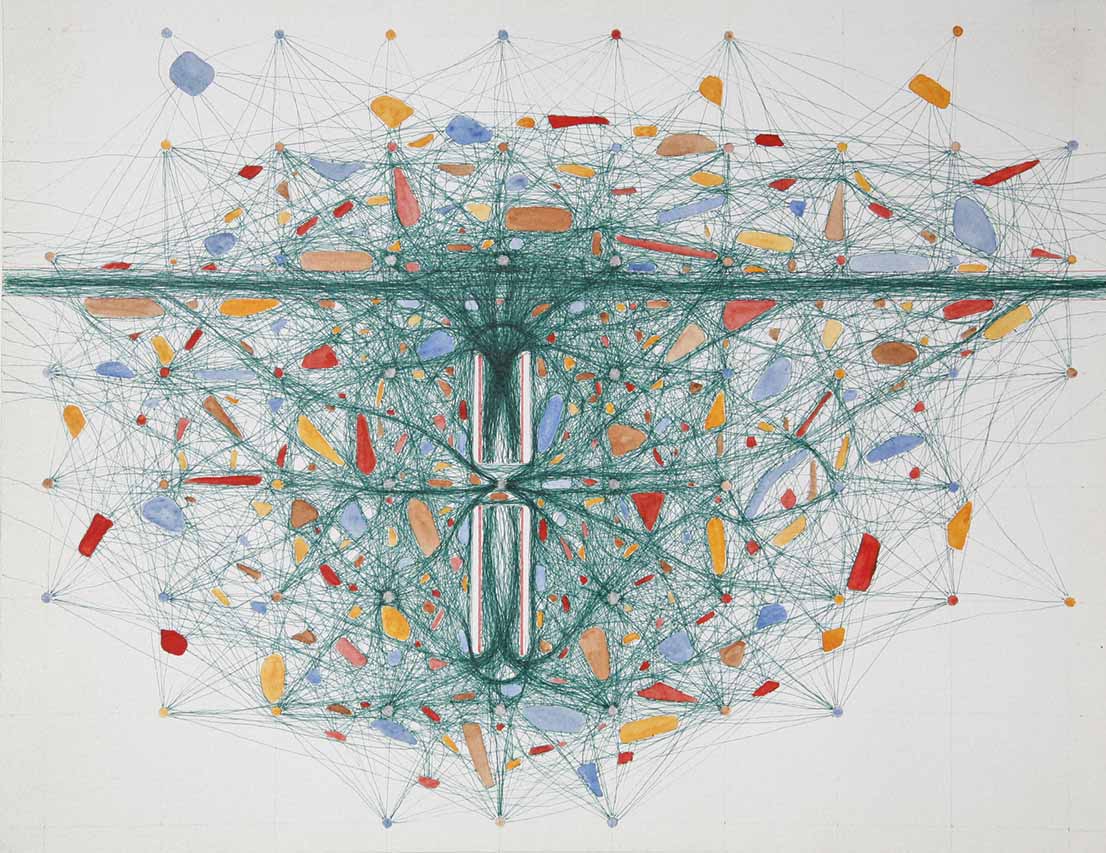 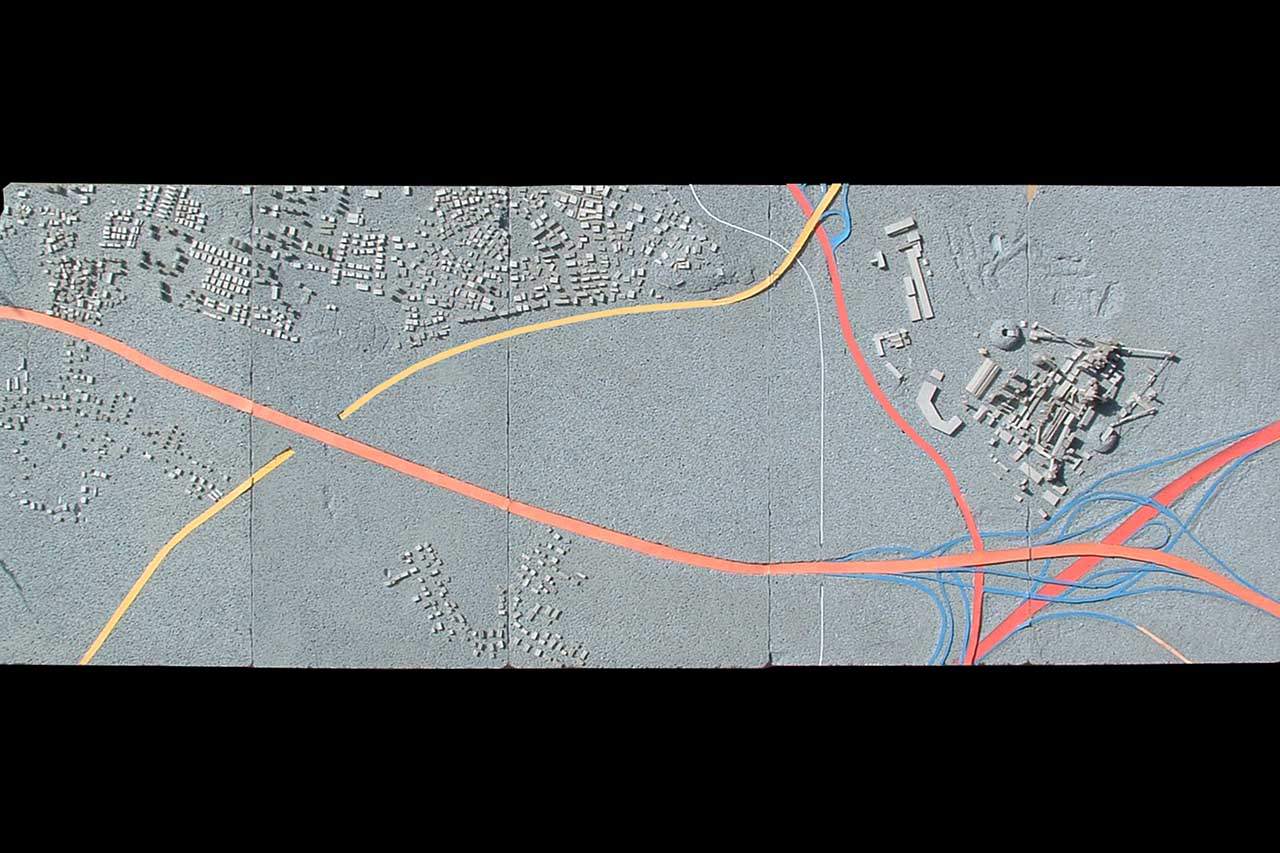 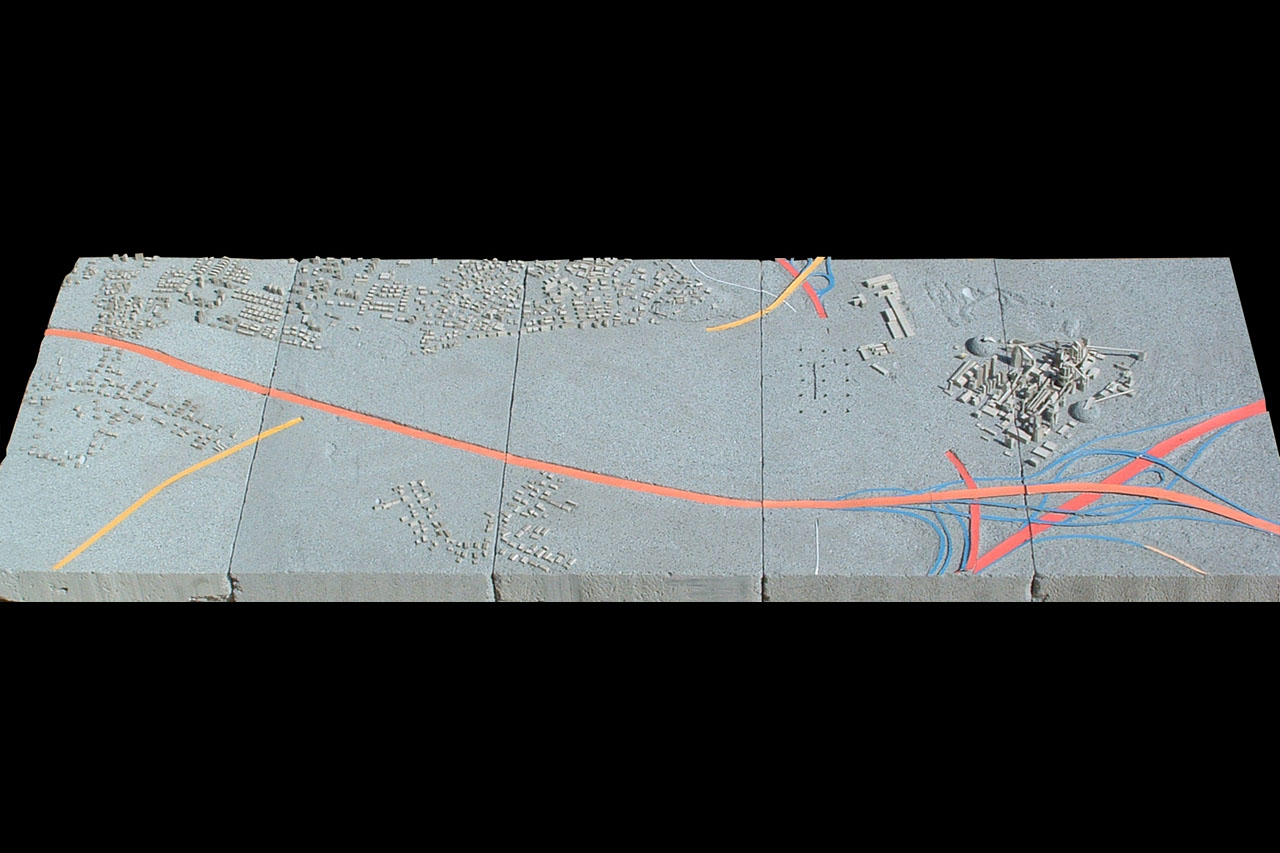 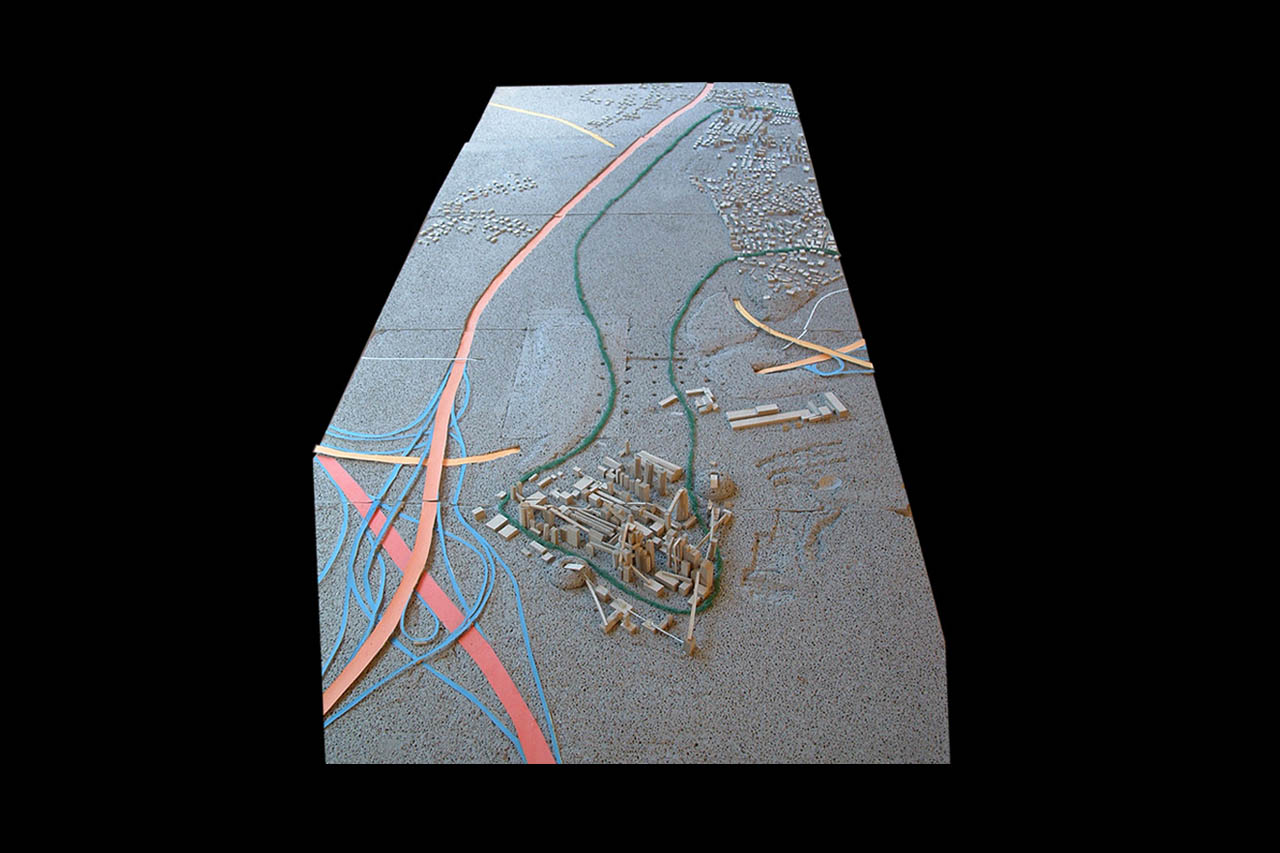 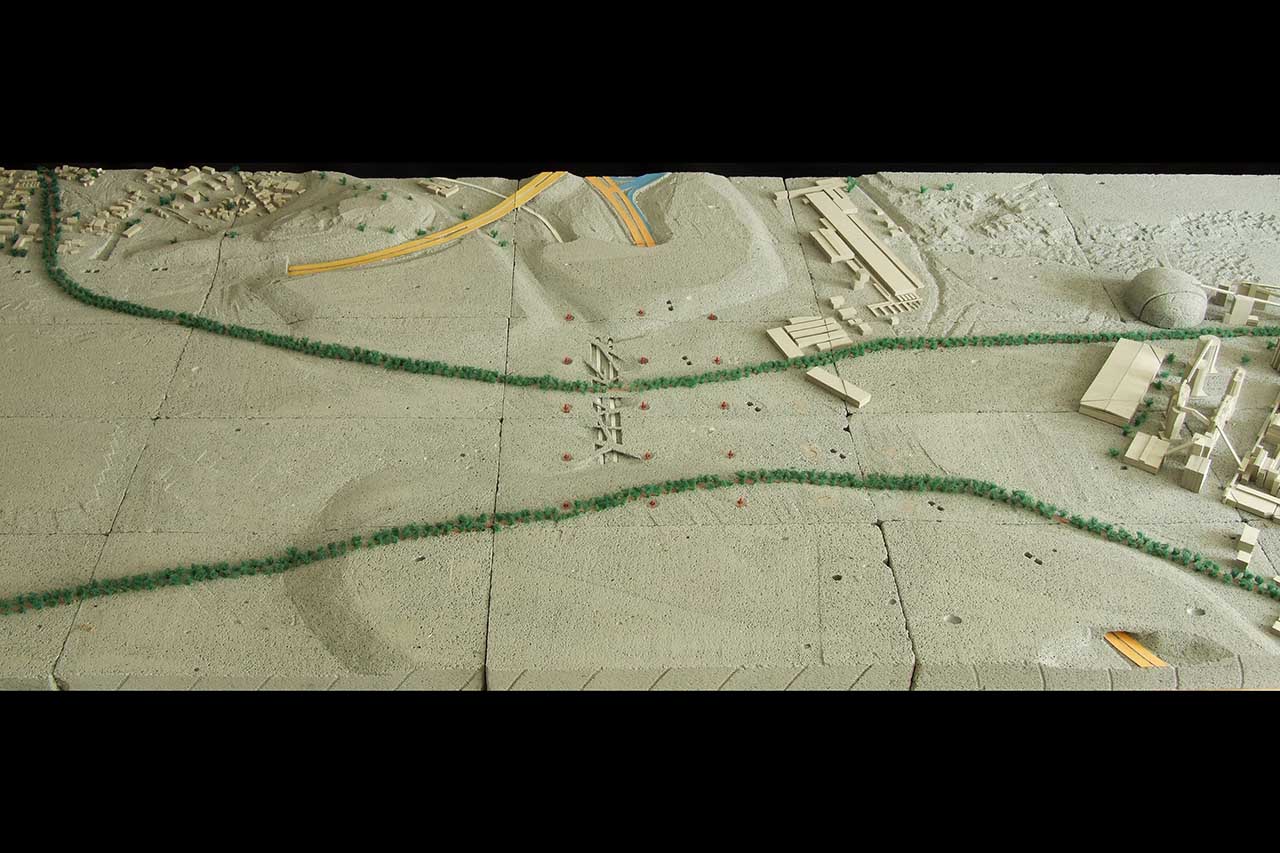 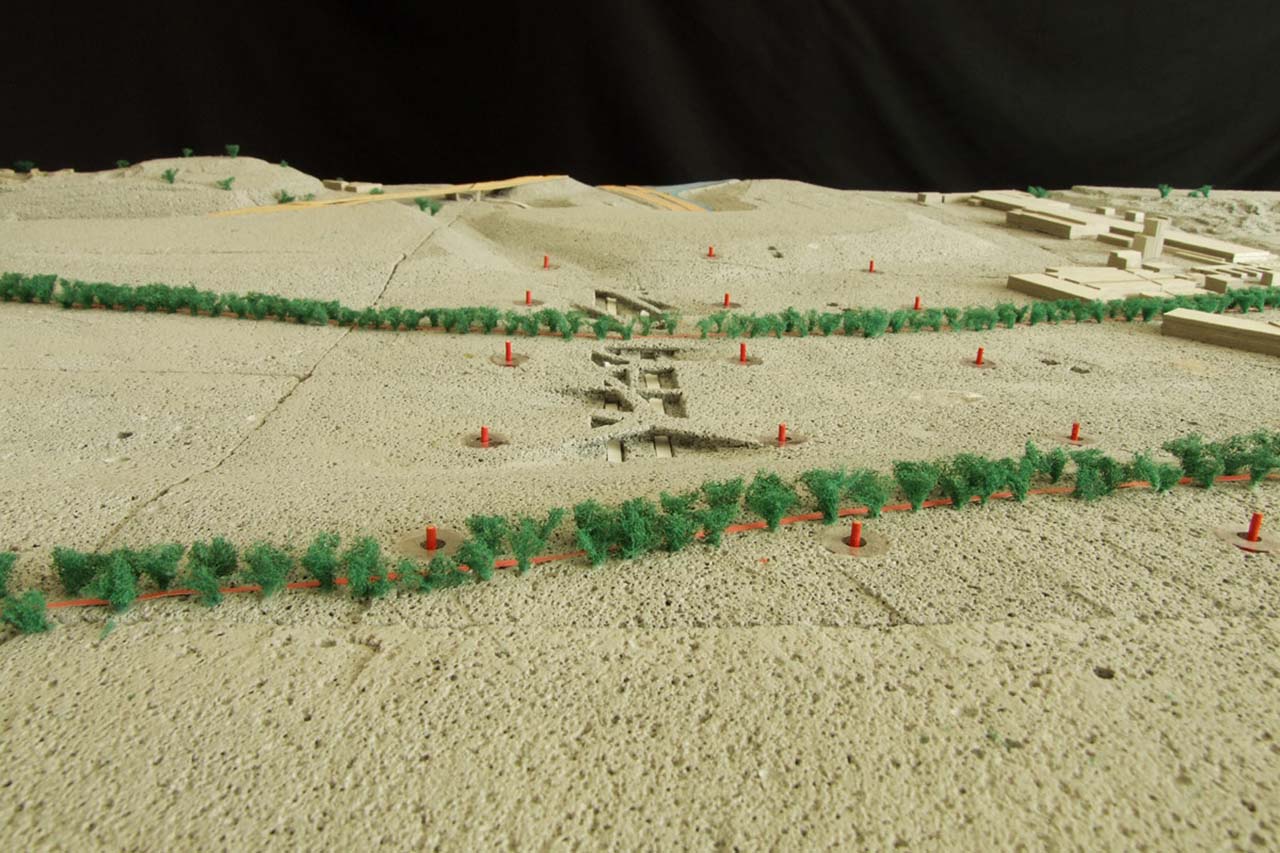 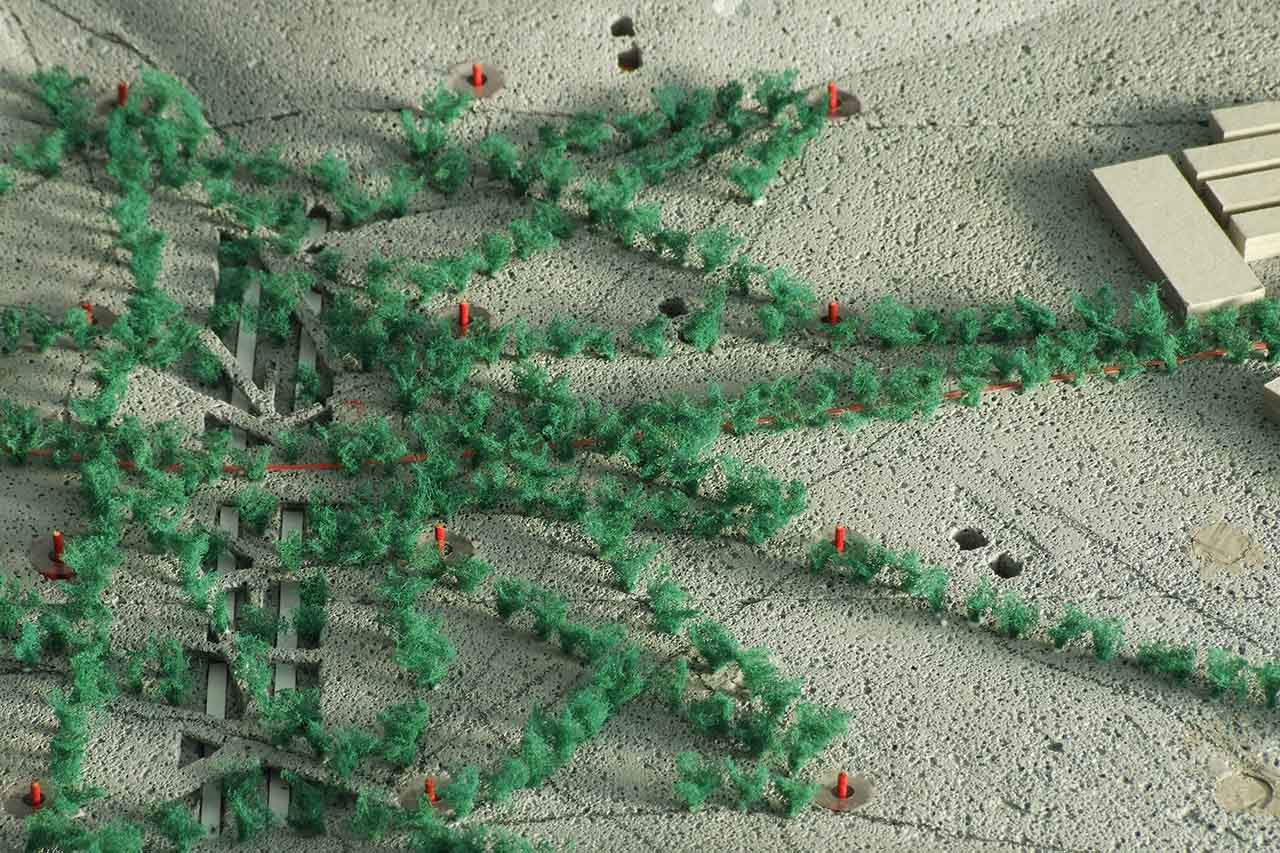 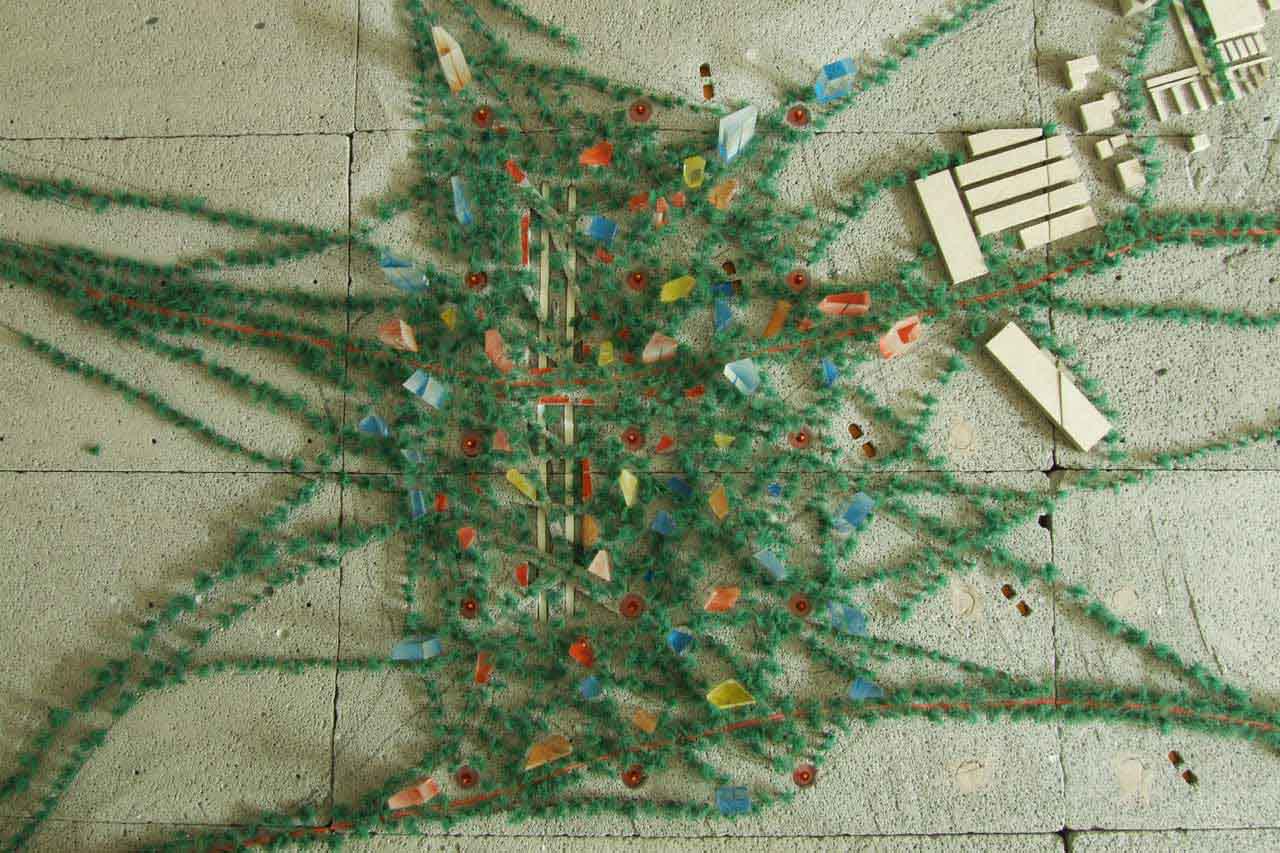 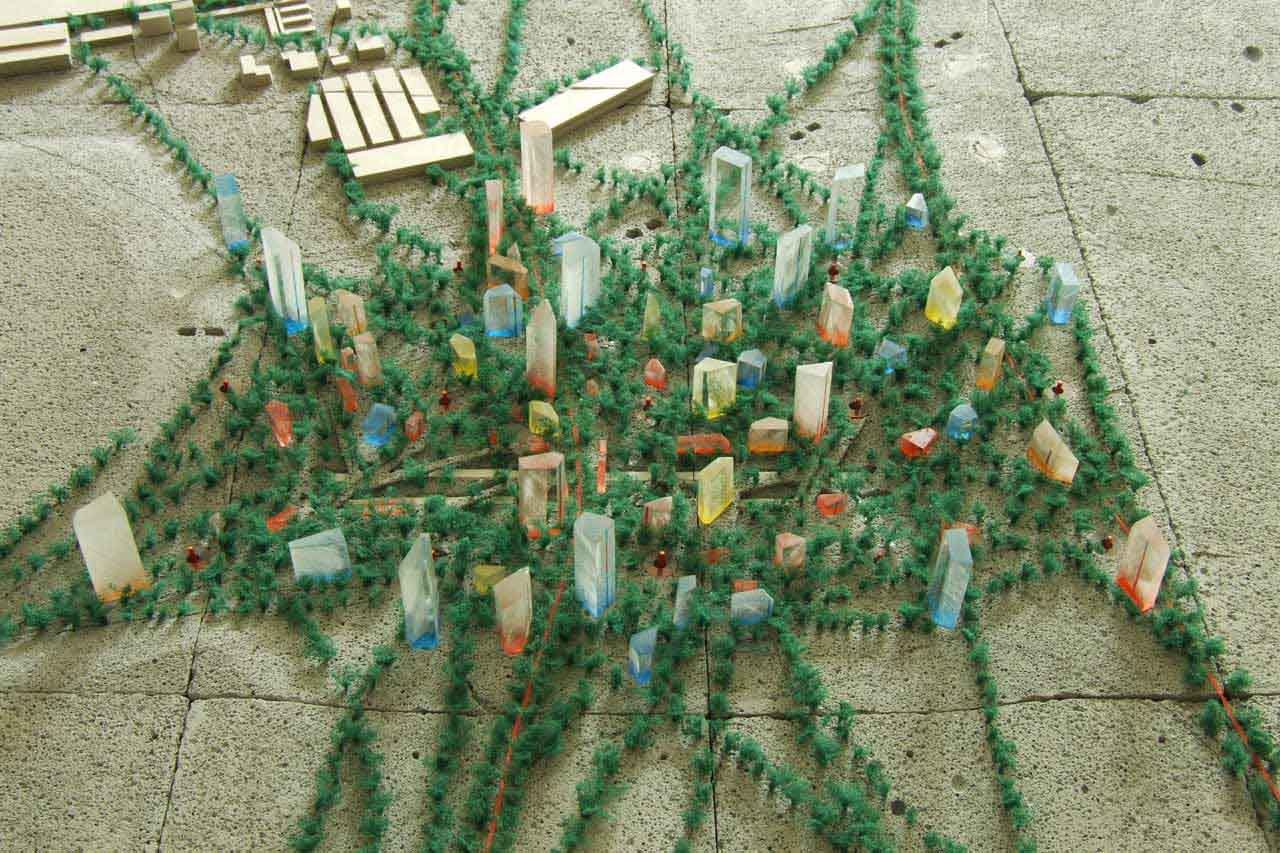 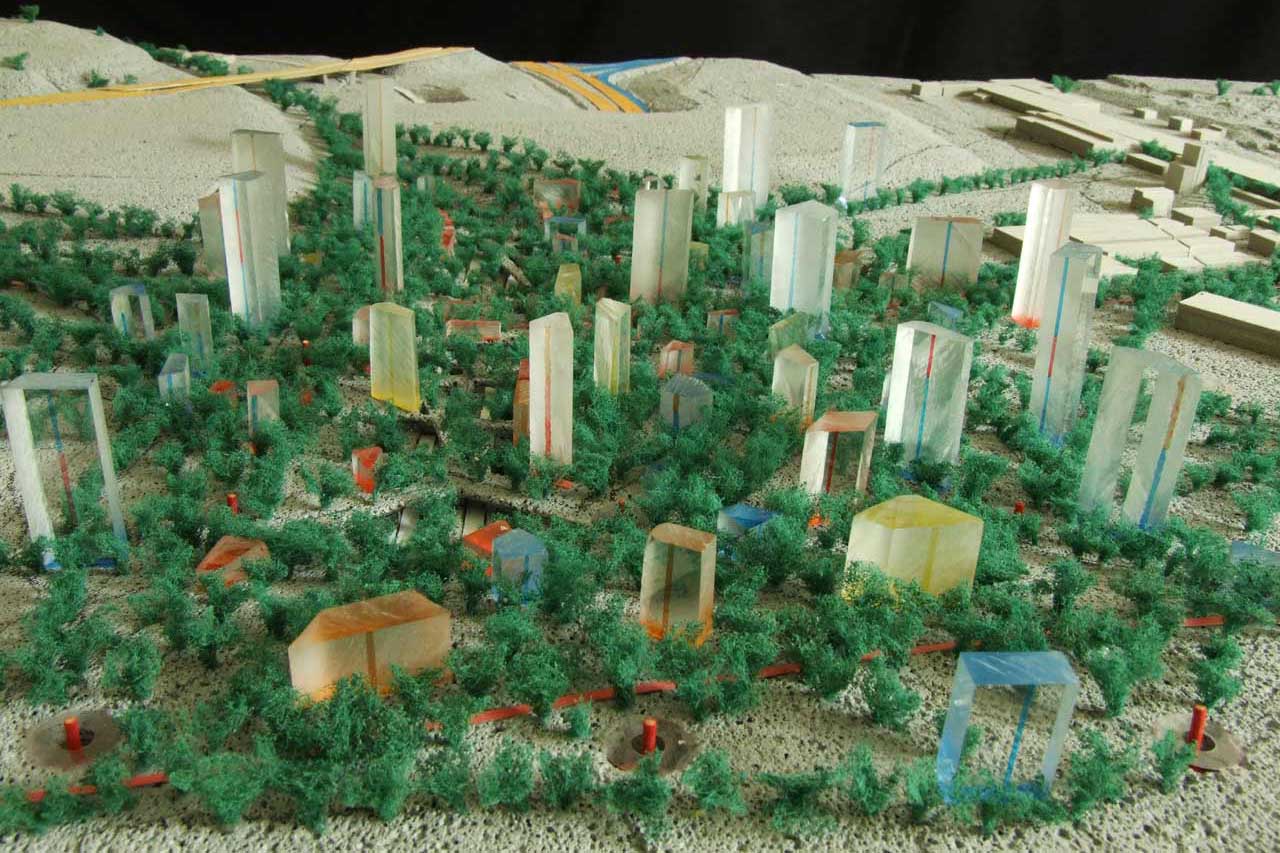 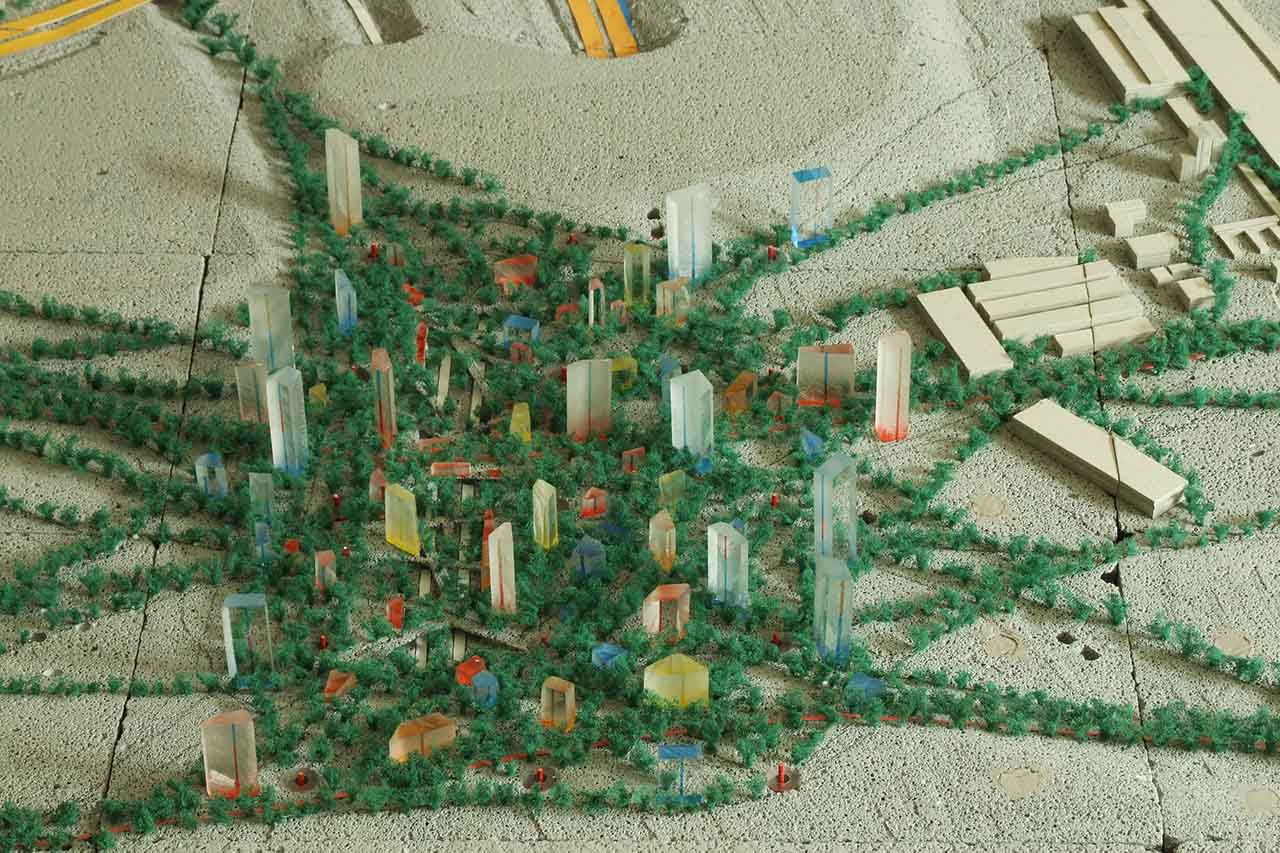 Can city and nature develop through complementing each other, rather than competing with each other? Can they truly integrate, creating a high-density urban environment in which the public domain is green?

Can urban environments develop in response to the needs of the pedestrian rather than to those of the motorist?

How can we create infrastructures that support spontaneous bottom-up development?

The strategy I present here takes on these challenges. At the same time, it tackles the acute global problem of suburbanisation, which entails the destruction of natural open areas and a constant increase in the use of cars.

This strategy makes use of the common situation in which a railway line passes near a road interchange. While masses of people pass in such relatively central places daily, the lands immediately surrounding the infrastructure are usually empty and unused. 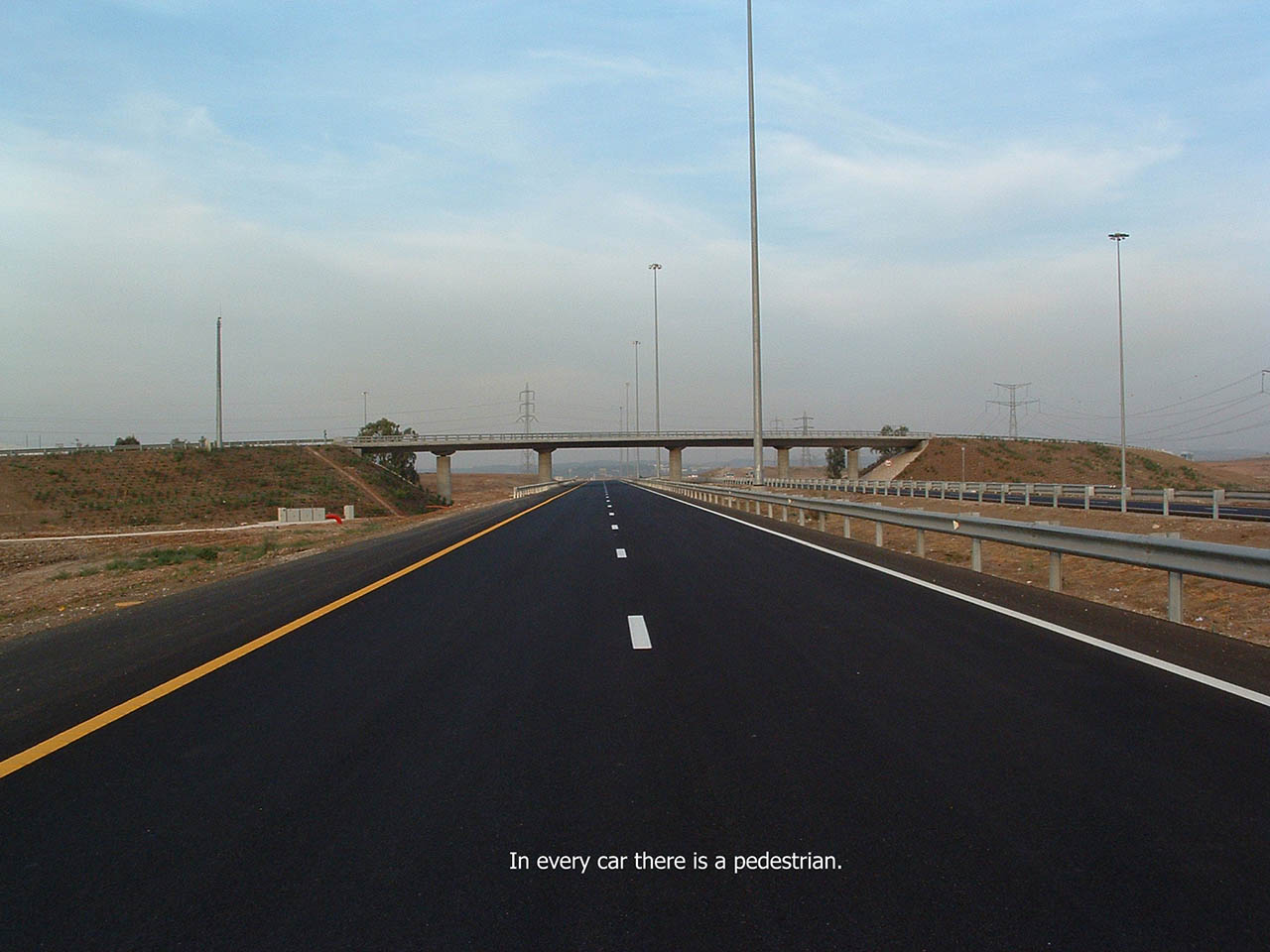 The generator for the development of the new community is a new train-station with underground parking, connected to the interchange. Drivers can park, take an elevator to ground level and walk to the station. The path created by walking is a key element that will draw the new community’s ‘master-plan’. 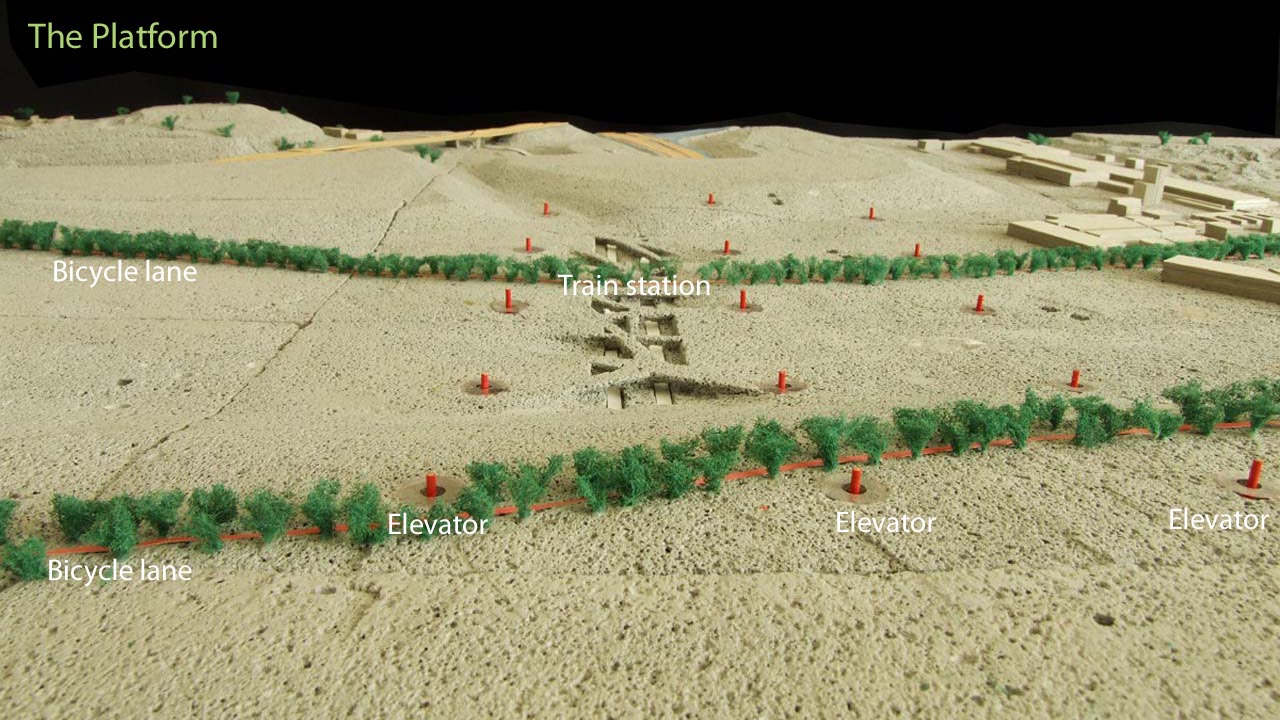 The platform for the development of the new community consists of the underground parking lot, topped by a thick layer of earth capable of supporting a high-density environment of large mature trees and buildings. The platform is composed of modules; implementation starts with a few modules, and more are added as the settlement grows. 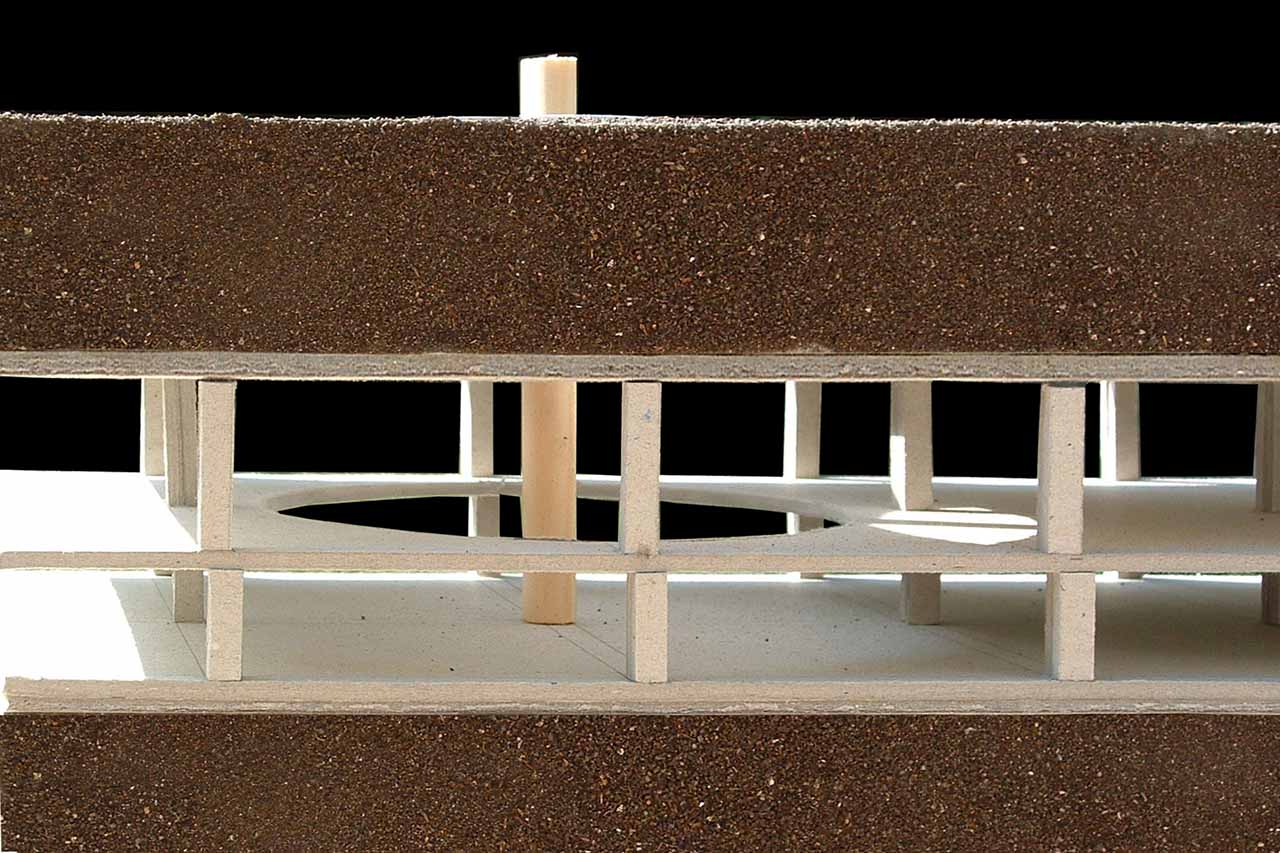 A set of guidelines would enable the process of development. I conducted some simulations in order to test the effectiveness of different guidelines. Two key guidelines that repeated in all the simulations are:
1. Once a pathway created by walking becomes visible, trees would be planted alongside it.
2. Individuals would be able to buy a plot flexible in shape, size and location alongside an existing path, construct a building and determine its function.
Additional rules aim to encourage mixed-use and high-density development.

The following video simulates implementation at a specific site:

The substantially higher ratio mentioned above is achievable by adding an underground layer of parking and roads, which enables the ground level to remain car free, consisting only of buildings surrounded by green open space. The main concept of the strategy is to create a situation in which when the built area expands it does not bite into nature, but rather makes nature expand as well.

The area would benefit the wider surroundings by acting as a type of transformer, changing movement by car into movement by train. With the enormous amount of new trees planted, it would also provide a ‘green lung’ for the wider environment. 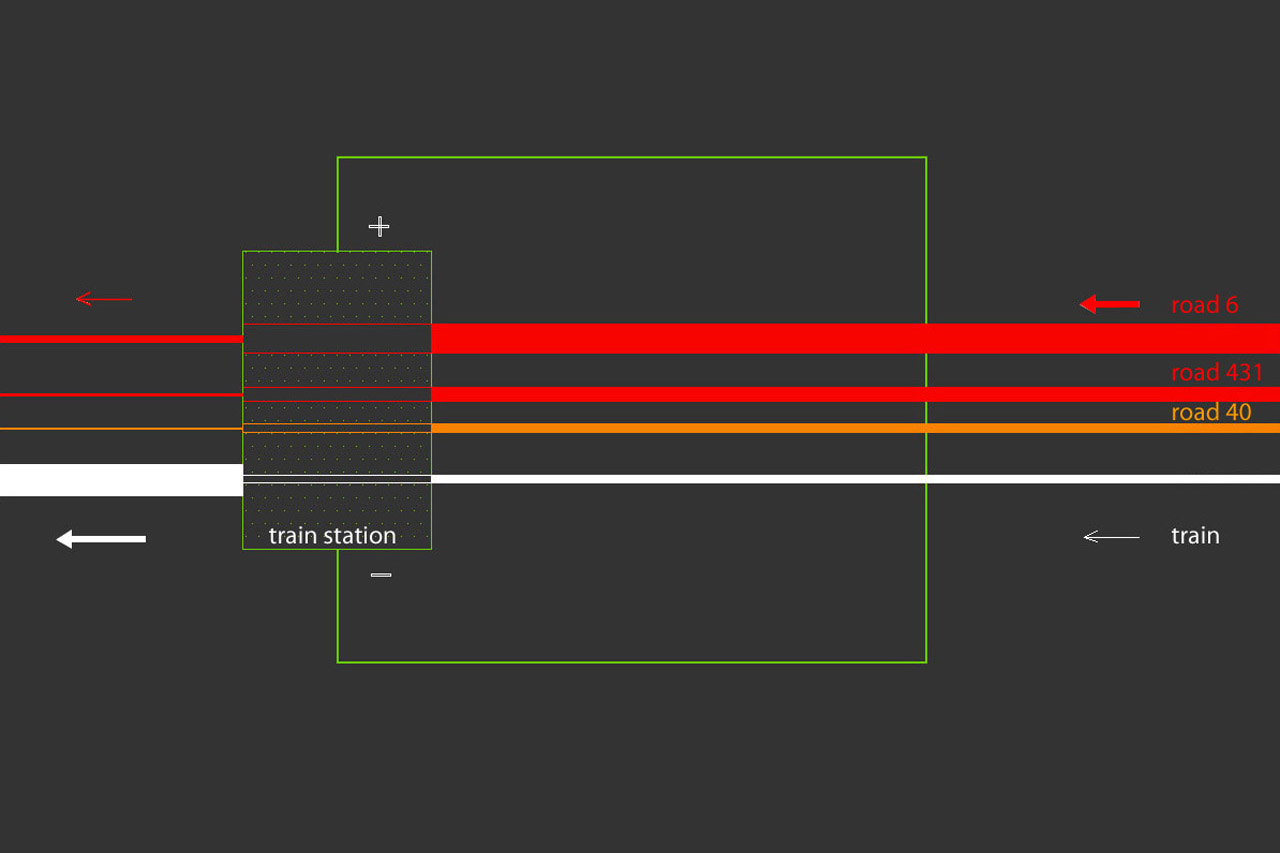 The compact mixed-use environment, rich in shaded pathways and free of cars, would be ideal for walking. The inhabitants of the area would be able to reach almost any place they need to for their daily activities on foot. Car accidents and air pollution would be much reduced and the environment would also be safer for children to walk and play outside.

The pedestrian friendly public domain, combined with the diversity of the human landscape typical to an area of transit, would promote a sense of pluralism that can usually be felt in a big city. This is highlighted by the fact that everybody would share the same large and high-quality public area regardless of different income-levels.

The combination of relatively cheap land found near interchanges, high population density and the modularity of the infrastructure, should result in a low infrastructure per person cost. This would make the area attractive for developers, thus turning free-market forces into an agent of collective interest.

The strategy would enable growth, generated by the needs of the users as and when they arise. Rather than pre-planning the settlement, it allows unexpected future parameters to influence the process of development. This adds life to the system and makes it capable of adjusting itself to the challenges of the moment. We believe that a system which lives the moment is best suited for the unknown future.

I started to develop this strategy as part of my studies at the Department of Architecture and Spatial Design at The London Metropolitan University between 2004 and 2006. Since then I have continued developing it independently. As part of the process I have occasionally consulted with friends from different fields, including economy, psychology, community work, education, human rights, geography and architecture.

This project deals with issues that stretch beyond the expertise of architects. A great deal of faith and dedication on behalf of many people – architects and other professionals - is needed in order to realise an alternative way of creating settlements. If you feel you can contribute to this project and would like to take part, please contact me - cooperation is very welcome.